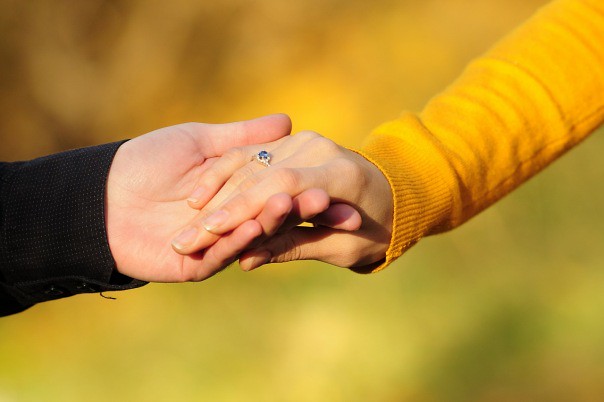 The “taken in hand” relationship model is not a widely popular choice, but it is my choice. I certainly do not claim that it is the best type of relationship or that it’s what everyone should do. As with other relationships it depends solely on the people involved. It is a complex system that is not easily defined. However, since it often needs clarifying, I use this explanatory blurb:

“It is consciously and consensually male controlled sexually exclusive monogamous relationship in which the man’s power is real and for the purpose of cultivating a deeply connected, fully engaged relationship. How the man expresses his dominance is an individual matter but it’s for the benefit of the relationship rather than being purely self-serving. The man protects and cherishes the woman he leads. The woman responds positively to her man’s control.”

I prefer a “tih” for a number of reasons, the first of which is that it creates a male female dynamic I identify with. It is a simple conflict resolution structure, and enhances the sexual dynamics within the relationship.

The alpha male is the type of man who is a fierce rival, a consistent provider, a gentle father, an attentive lover, etc. The alpha male controls his environment the best he can, and cares for what and whom he perceives to be his responsibility. When the alpha male is at his angriest he doesn't shout or raise his voice, his voice actually becomes quieter, a very deadly whisper. There's no need for him to shout in anger because his intent gets across in his demeanor. He's very intimidating when he wants to be with just a look or word. Yet he's playful and gentle with those he considers his.

The alpha male is elusive and in my opinion an endangered species. "Why" you ask? Well in the US we have made leaps and bounds to promote the ascension of women and women’s rights. However, while implementing this essential movement we began an unconscious anti male movement. Instead of saying "if I choose to order my meal and pay for it myself, that should be acceptable to men and society as a whole" we said "it is not ok for men to order for us and pay for things since they are not our masters and we can do it ourselves". Instead of saying "if I want to pursue a career that should be a welcome and supported effort" we say "I will earn my due and suggesting otherwise is a sexist attitude." An alpha male would hate to see his woman reach into her wallet if he has the means to provide her with what she wishes to buy. Of course in the current social climate his desire to care for his woman is seen as possessive, unenlightened, and most undesirable. The alpha male must go into hiding or put on a mask so as not to incur the wrath of society in general.

I say all this because "tih" relationships tend to attract alpha males. Being able to flex their masculinity freely and with a partner willing to yield is attractive. The dance of dominance and submission will always attract an alpha male.

A "tih" is a simple conflict resolution structure. Since there is a dominant partner the final decisions fall to them. They have an ultimate yea or nay power. A veto vote. Of course this element is what is undesirable to most. People don't like the idea that someone has ultimate say in their life. But what must be understood it that the dominant partner must act in the best interest of the relationship. Similar to the president, he can veto a law but if the people he governs disagree enough with how he's leading he won't be reelected or worse can be impeached. It's the same with "tih", if the dominant partner acts selfishly or consistently ignores the needs of the submissive partner that is the end of that relationship. The other safe guard is held by the submissive partner. A willingly submissive partner does not submit to anyone. You do not blindly relinquish certain power to someone you don't know, or someone you know will abuse that power. Just like you wouldn't give your power of attorney to a stranger or cousin Jim the gambler. Yielding of will is a gift that should not be given or received lightly.

Many "tih" couples say their fights are almost nonexistent. They are easily ended by the dominant partner. One couple I know used to argue about how to spend Saturday evenings. There was always something one wanted to do the other didn't and they'd fight and up with her mad and him gone and no one had a good time, and they'd be in a fight till mid week. When they became a "tih" couple the ultimate say came down to him. Sometimes they'd do what he wanted, sometimes they'd do what she wanted and sometimes they'd do something neither had planned. She'd of course sometimes be upset at not getting to do what she wanted but he was fair and she would eventually have fun. There wasn't that feeling of "I have to fight to get what I want or be right". He'd give her what she needed and what he needed and it was simple.

There is also a sexual element to "tih". There is something arousing to a submissive female about the unshackled male. There's an oddly exciting element to non sexual dominance. Sometimes it does enter the bedroom but more often than not "tih" people are not into S&M D/s play. In fact many S&M enthusiasts find the "tih" concept scary. Giving ultimate power to someone outside the bedroom is rattling. With S&M you can turn it off. Put in on and remove it like a coat at the door. You can be totally vulnerable in the boudoir but put up your shields everywhere else. "Tih" leaves you vulnerable.

"Tih" relationships tend to have a more active sex life since the pace is set by the man and men tend to think of and engage in sex more often than women. Submissive partners do have to adjust to the frequency of sex, as well the spontaneity of it. I know many "tih" women who say their husbands want sex at the strangest times: after repairing something, whenever she's cooking, if she wears skirts, after playing basketball, etc. But most of the women say that their sex drive has increased to match their mates. There is something arousing about him wanting you and yielding to him. For some the dominance itself is a turn on when he is intimidating you're reminded of his manhood: if when he kisses he pins you to a wall, or carries you off to the bedroom, or kisses you in the middle of a disagreement.

In male dominated "tih" more often than not the submissive female is someone who is dominant in her career or life outside the relationship. It's an interesting set of concepts. The wanting to release the reigns to a competent partner. Similar to dominant female wolves who only expose their throats to their male partners. She may be absolutely dominant in the corporate arena and extremely content to be dominated by her mate.

"Tih" isn't for everyone. Most relationships today are of consensual equality and few choose the imbalance of "tih" but for those who have the desire to freely yield to or freely dominate a worthy mate it might be for you. It is ultimate giving on both parts. From the submissive perspective: "if you will provide for my every need, I will give you my entirety". From the dominant perspective: "if you let me rule you, I will be a slave to your needs".