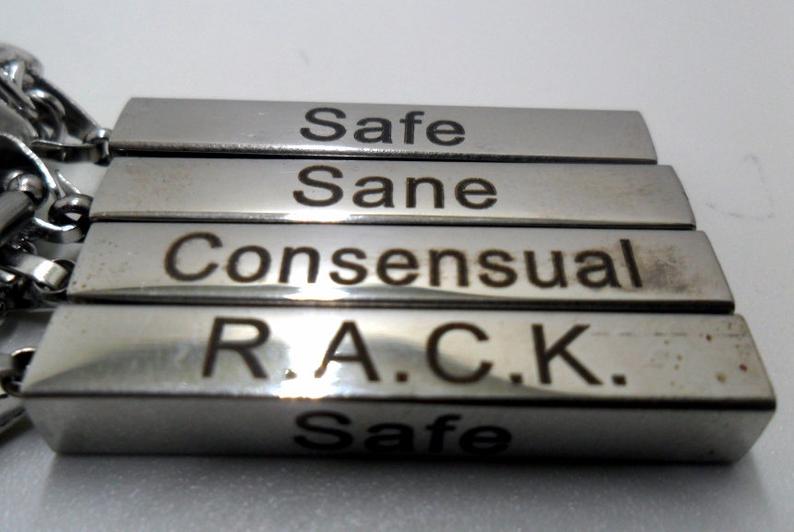 "Safety" is (a variant of) the first word of the "Safe, Sane, Consensual" motto, but what, exactly, are we talking about? Who is being made safe from what, and when, where, why, and how is this happening? Furthermore, how do we know that what we regard as safety precautions actually make us safer? How "reality tested" are these precautions?

OK, a couple of things: As long as there is something in your life that you don't want to lose or see come to harm, you face at least some degree of risk. (Indeed, this is why someone who has "nothing left to lose" can be so dangerous to those of us who still do have something we care about losing.) This risk can be to your life, your job, your health, your kids, your money, whatever. So the questions emerge: How are those things at risk? What can be done to mitigate that risk?

There are obvious risks associated with doing BDSM. Most of these are to one of three general entities: Your physical well-being, your emotional well- being, and the well-being of your relationship with your play partner (and relevant others). That something _could_ go wrong is obvious. People who hang out in the community hear of incidents in which things _did_ go wrong, with results ranging from ruffled feelings to multiple fatalities. (There was the incident in Canada -- I can dig out the reference if you force me to -- about the two people who died after they put both of themselves into bondage and their house caught fire.)

In the "proactive" approach, one considers what Bad Things _might_ happen and takes appropriate precautions to reduce their chances of happening. To a certain extent, this is always based on speculation, and thus may not lead us to prepare for events that are of high probability and/or high severity. On the other hand, it may entirely prevent a Bad Thing from happening (at least to you) in the first place.

In the "reactive" approach, one considers what Bad Things _have_ happened to oneself or to others, and takes appropriate precautions to reduce their chances of happening again. (One of the great benefits of communication opportunities such as this forum is that people can widely report their "incidents" and enable others to learn from them.)

Looking at the "reactive" approach, it's useful to play a game I call "follow the pathology." What kinds of Bad Things are actually happening, and to whom, and under what circumstances, and how often?

Well, let's see. What do we have reported?

Second, the overwhelming percentage of assaultive/abusive/rape situations I've heard of have involved playing in private with a relative stranger in a low- accountability situation. Psychopaths and other Bad People aren't into delayed gratification, and usually want to get their victims alone quickly -- thus they don't like things like having a few non-play meetings first, meeting to play at a party, etc, and they _really_ don't like accountability mechanisms like Silent Alarms.

(I've talked with many people -- mostly submissive women -- who have survived such assaults, and I make it a point to ask them "if your partner had been certain that a third party knew where you were, what you were doing, who you were doing it with, and that you would be checking in with them later, would this assault have taken place?" In every single case so far, the reply has been "no." Some have also reported that the prospective partner called off the play date entirely when they insisted that such a mechanism be in place.)

General precautions are those that apply to most citizens in most circumstances. For example, because there is a certain randomness regarding when and where "emergencies" emerge, it's widely recommended that virtually everybody do things like wear their seat belts, have smoke detectors in their house, learn the basics of First Aid and CPR, etc. (Again, EMS crews see first-hand how people who really were "minding their own business" sometimes nonetheless get zapped, and those incidents leave lasting impressions. It's been more than 20 years, but I still remember responding to one particular call where a drunk came over the centerline and went head-on into a car containing mom, pop, and a whole bunch of kids.)

Why do BDSM-related safety discussions turn some people off? IMO, it's partly because such discussions "spoil the illusion." Some of us (and, please, nobody take this overly personally; it's not at all my intent to single out or disrespect any specific person) want to come across as "dangerous predators" or something like that. To talk about safety, one usually has to "remove the disguise" for a while, and -- damn it -- doing that reveals the fundamentally decent person inside the "predator" disguise.

Another reason safety discussions annoy some people is that a fair number of "us" -- particularly among what I think of as the "cyber-anarchist" folks on the net -- are just double-dog bediddley goddamn damned that nobody else is going to Tell Us What To Do regardless of how noble (and usually awfully god- damned self-righteous) their motives are. These people _may_ occasionally -- and often somewhat grudingly -- concede that there is the odd, minor, technical point of information that they didn't already know and -- again, often somewhat grudingly -- thank us for sharing that, but don't expect to get loved for bringing that to their attention. God love them all.

So where does that leave us? Well, we learn by trial and error and (if we survive the error) we report back on what did and didn't work so well. Over time, a pretty good body of information emerges. Who ultimately decides who is right and who is wrong? IMO, that decision is made by Charles Darwin.

Warm regards to all,
Jay Wiseman