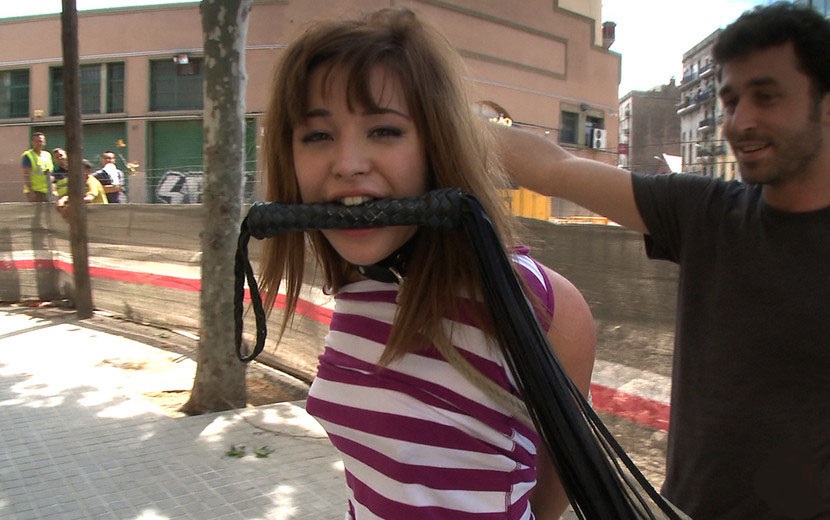 As in all truths the paradox.

Humiliate; to lower the pride the dignity. To mortify, humble.

Degrade; to reduce in rank or grade. To reduce in worth or value.  To dishonor or disgrace. To deprive to demote.

To be humiliated is to be able to recover rather easily from the act on your own or by the grace of another.

To be degraded is something else, as some one said, "It stays with you." It is meant to. It is the breaking down of your self-ness, an additional part of the taking away of your time and privacy on the road to deep enslavement.

As a few very soft examples; it might be something as simple as having to walk thru the restaurant with your just removed panties in your hand and give them to your Owner when you sit back down or He might stand on your foot in public and you are not allowed to react

To have to be at the bar with legs apart facing the band stand might be humiliating for someone. But to have a chain chocker color on and be "leashed" and led out through the crowd and made to squat down between two parked cars to be allowed to go to the bathroom might be more degrading for some.

To be spanked naked in front of others and then handed over by your Owner to all of them to take Their turns might be humiliating.  But to be blindfolded naked and squatting up against a wall at a party where you are cuffed and hooked to the wall and have a sign around your neck, "Oral slave for use tonight." Might be degrading.

To be slapped in the face in public by your Owner for a really out of line smart mouth might be humiliating but to be used as your Owners toilet might be degrading.

To have a rubber filled with quarters in your pussy and when your Owner pulls the car up to the news boy for the Sunday paper you have to pull it out and pay him might be humiliating.

To be blindfolded and given an enema while on a bench in the bathtub with a dozen people there watching and laughing so later you will not know who saw you might be degrading.

There are endless examples and what is degrading to one might be humiliating to another. But there are important differences and one would hope their Owner understand the why and wherefores.

Humiliation, degradation; it can be cold as ice or a wonderfully intimate series of acts.

It is about a deep rooted desire and need in the animal brain (the oldest part of the brain) a primitive part of out biological make-up.

If its degradation, humiliation, dehumanization, de feminization, objectification etc there is an underlying purpose; deconstruction. Deconstruction in art literature music, visual, literature is plentiful if you wish to explore the meanings of it.

There is a paradox here; to become less, to "disappear' to become more.....this of course is tied into self image, self worth. The automatic reaction to this is one who "suffers" from low self-esteem but this is not necessarily the case once you look deeper. All these things above really relate to one thing a form of ego death.

This is not considered a bad thing in many religions of the world; it is seen as a necessary place to be before one can move onto to further spiritual knowledge.

A cursory reading of the Lives of the Saints or any volume which speaks to mid-evil Christian self flagellants and ancient forms of meditations, Asian, American and African tribal rituals. All of these societies, "religions" include ritual that in some way humiliate,

degrade the participant, often in groups and some times alone, but they all have one thing in common; a belief it is a necessary step to go "down" to be able to be "reborn" up.

Many argue about the concept of duality running throughout our awareness of life and the universe at large but this is a good example in My opinion, of the truth of duality.

Whiter a recipient of humiliation and degradation is "left" after to rebirth themselves or their Owner sees the restoration as an important "second half" to the process is not of concern. I personally believe the restoration to be the important in making concrete the full circle of the duality. I think it cuts short the Total Power Exchange and leaves the Owner with less power. But that must be worked through by those involved.

It is the process that is important as well as the outcome. We will address all of this at a deeper level consciousness. This is not the same as unconscious since all parties are aware of what they are doing and although many seem not, why they are doing it.

The dancers become the dance.

For instance if the parties are into piss play that is a crucial element by which a process is learned and developed. Perhaps the piss games are seen as punishment or as a sacred connection. In either case they are using sexual and social elements out side the "norm" to get to the point they need to be.

The exchange of power here is clear and well defined.

Almost no one is raised in a family where piss play is looked upon as a normal sweet delightful element of family interaction while they are growing up.

You now have automatically set up a situation in which some "bad" has been established.

In TPE/APE relationships through the concept of "Ownership" you now have a duality; good and bad.

As one is under total control of Another there is no ability to "choose" to be bad, one is expected, demanded and in some "play" forced to be bad.

As humiliation turns to degradation one becomes deconstructed; out of, other than ones self as they perceive themselves. In some who are of a well developed nature move into something called "witnessing".

The state in which you are removed from yourself and can step back and observe the entire "scene", environment, others and even yourself as a separate entity. As if you were watching a movie which you are in.

This pulling away is a giving up of not just control over your self, this is psychologically doubled in the TPE/APE slave who has already relinquished that, but you are also "disappearing" your-selfhood. You are becoming less of a person and more of an object or mere concept; your very "you-ness" is becoming abstract, less real.

This can be a shocking revelation and relief to become so transparent, light weight heading toward a blissful nothingness. This is an intuitive desire to face and meld with the void we all know awaits us.

Genuine Asia philosophy, as opposed to most of what we get as such in the West, speaks to this fluently.

There are many concepts fully accepted that deal with facing you own ultimate aloneness and the void in which you exist. This at its deepest root, under the other entire socially acceptable kink thought" (bet you never thought of that one!) is the attraction of humiliation and degradation; total reduction, deconstruction of self to the point of disappearing into nothing.

This is yet again either used as merely control and that is the end of it satisfying all parties or it is seen as only another tool of Domination for a more total and deep internal enslavement.

It is in the end one of the more beautiful aspects of a loving TPE/APE relationship in its straight forward purposes and execution of Total Power Exchange.